Has it already been another year?  We are not really sure where 2019 went, but it’s almost gone, and here we are.

Alex and Jenny celebrated 15 years of marriage early by going on a cruise to Honduras, Belize, and Cozumel in May.  They ate chocolate molten lava cake every night, tried motorized bicycles, ate more until they were almost sick, and generally felt glad that they have made it this far. Alex is the chair of his department this year, and Jenny has gone back to school. She also started a new blog which is a bit less personal, and has been working on her sewing website if you want to read about that stuff.

Grace tried out for the tech crew of the school Christmas play, A Christmas Carol: A Rock Opera. We missed her terribly for the whole time because she was home from school very late.  In the end, the set looked great, the costumes were lovely, and Jacob Marley’s make up, which she did, was truly awe inspiring. She has made a lot of her own clothes, including an elaborate Halloween costume this year.

Henry has fallen in love. Her name is Lizzy, and they are living together in his room. She is an iguana, and in fact we believe she may at some point prove to be a he, but we will cross that vine when we come to it. He wishes for an iguana bath robe and green blanket for Christmas. His parents are hopeful that he will remain human, as they like having human children, but only time will tell. Henry is loving The Hunger Games and the Heroes of Olympus books, and will soon enough be a twelve year old.

Scott enjoys scouting with his mom, who has been his leader this year.  They hiked skull rock recently, and were only slightly rained upon. He has been learning the piano, and will have performed two Christmas songs at his first recital by the time of publication of this letter.  He is a tolerable Pokemon hustler, and a great older brother to Kaleb, who must ride the bus to school every morning.

Speaking of our favorite five year old, Kaleb began Kindergarten this year.  His mother cried when he got on the bus for the first time. He enjoys Mrs. Brunstad’s well organized and musical classroom. He comes home singing, “You can spell my if you try, M-Y. M-Y. You can spell my if you try, Oh my my my,” to the tune of Camptown Races. It is pretty much the cutest thing ever.

We hope you and yours are having a joyous season. 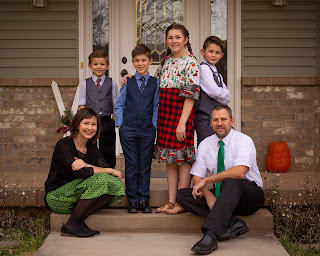 It was nice to read a bit about you and your family's year! You have an awesome family and are all doing much good in the world! It sounds like you're enjoying life, that's good. :)

The League of Awesomeness